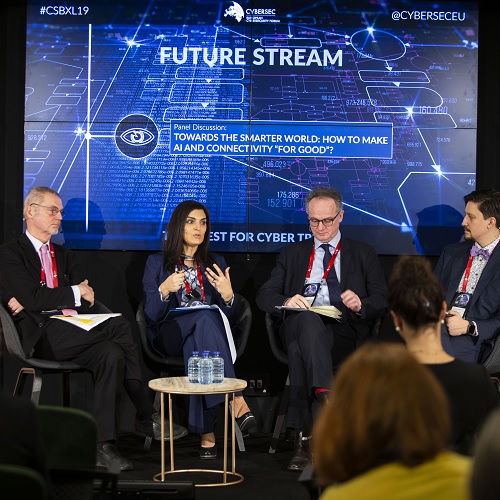 One for all, all for one – that was definitely the main theme of the 2nd edition of CYBERSEC Brussels Leaders’ Foresight taking place on 20 February, gathering the cybersecurity policy makers and high-level private sector representatives. EU and NATO cooperation, quality of information sharing, tackling the threats coming from China within the 5G development, and cybersecurity of the elections – those were the main points of discussion of yesterday’s debates in Brussels. The conference speakers also introduced the idea of Three Musketeers, who have to team up to build trust and security in cyberspace – those are the government, private companies & the civil society.

Izabela Albrycht, President of the CYBERSEC Forum highlighted that since we rapidly moving towards a smart world, with everything being smart thanks to a connection to the internet, we need to also introduce smart power. That smart power should merge soft and hard powers and can only be exercised thanks to cooperation and pooling together resources and capabilities of all stakeholders. “Today, nothing is more important than the cybersecurity call - all for one, one for all” said Albrycht.

CYBERSEC Brussels hosted, among others, Antonio Missiroli, Assistant Secretary General for Emerging Security Challenges at NATO, who gave his opening remarks introducing the Alliance’s progress in regards to cybersecurity. “The cyber threats are real and NATO will continue to handle those threats” said Missiroli in his speech. “We have taken steps to intensify the cooperation with the European Union in regards to cybersecurity, but we must continue to look beyond EU. We also recognize the need of cooperation with the private sector and the importance of information sharing”.
The topic of information sharing was a connecting point of many CYBERSEC speakers’ remarks, who underlined, that the quality, not necessarily the quantity of information is crucial. Steve Purser, Head of Core Operations at ENISA, who took part in the discussion panel on cyber insurance, indicated that the real challenge lies in sharing the right information, in the right time with the right people. – said Purser.

CYBERSEC Brussels participants also witnessed the first public comment made by Ciaran Martin, CEO of the National Cyber Security Centre of the UK after the speculations, that spread widely on the web, that the UK has determined the ways to limit the risks from using Huawei in the future 5G development without announcing an outright ban, according to two unnamed sources cited by the Financial Times. “Huawei’s presence in UK networks is subject to detailed, formal oversight, led by the NCSC. Because of our 15 years of dealings with the company and ten years of a formally agreed mitigation strategy which involves detailed provision of information, we have a wealth of understanding of the company” said Martin. “We also have strict controls for how Huawei is deployed. It is not in any sensitive networks – including those of the Government. Its kit is part of a balanced supply chain with other suppliers”. Ciaran Martin also introduced three technical pre-conditions for secure 5G networks recommended by NCSC, which are higher standards of cybersecurity across the telecommunications sector, resilience of the telecommunications networks, and sustainable diversity in the supplier market.
NCSC’s CEO expressed UK’s commitment to continue working with European partners after 29 March. “The Prime Minister and her Cabinet have long made clear that our support to European security as a whole is unconditional” he ensured.

Ahead of the European Parliament elections, the big issue that was discussed was the resilience against hostile interference in the democratic processes. The speakers, who took part in the debate titled ‘Elections in a Digital Era’ were Sir Julian King – European Commissioner for Security Union, Toomas Hendrik Ilves – Former President of Estonia (2006-2016); Member of the Transatlantic Commission on Election Integrity, Pavel Telička – Vice-President of the European Parliament and Līga Raita Rozentāle – Director of EU Governmental Affairs for Cybersecurity Policy at Microsoft. Pavel Telička indicated, that the system is as strong as its weakest point, referring to the state of democracies’ preparedness. “We should take care of the social responsibility. We're looking for a change of a mindset”.