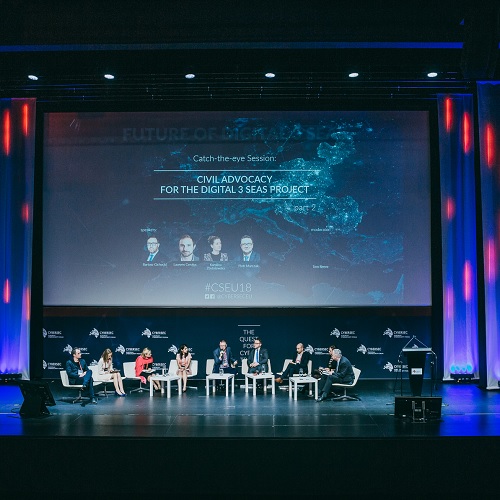 During the CYBERSEC Forum held in Cracow, Marek Zagórski, Polish Minister of Digital Affairs, announced, that the „3 Seas Digital Highway” project, initiated by the Kosciuszko Institute is one of the priority projects adopted by the Three Seas summit in Bucharest. The 4th European Cybersecurity Forum – CYBERSEC 2018, is one of the most important events devoted to the strategic aspects of cybersecurity in Europe.

- It is important to ensure that Digital Highway remains not only an idea, but that it is actually formed – underlined Minister Marek Zagórski During the opening panel of this year’s CYBERSEC Forum. As he added - The construction of a digital network has to be considered more broadly. These investments should be implemented, inter alia, during the construction of road and rail infrastructure. A month ago, together with the Ministry of Digital Affairs of Lithuania, we signed a letter of intent which expresses the willingness to jointly construct digital infrastructure, inter alia, along Via Carpathia.

As was recalled by the speakers of the panel, the Bucharest summit was also the moment of signing the letter of intent regarding the formation of the Three Seas Fund which is going to start its operational activity within the next few months. The Fund is supposed to have a € 5 billion budget and may generate investments worth at least € 100 billion. Some of this money is going to be used for implementing projects in the digital pillar. The initiators of the ‘3 Seas Digital Highway’ hope that the financing will also include these proposals, since safe digital infrastructure is the blood flow of digital economy and such infrastructure is the necessary condition for the further development of this economy.

The „3 Seas Digital Highway” is a part of the Digital Three Seas concept – a range of transboundary projects and initiatives aimed at developing the digital infrastructure, joint investments and R&D works, as well as political and legislative concepts carried out at a regional level. The Kosciuszko Institute is the main initiator and originator of this initiative. As was indicated by Joanna Świątkowska, PhD, the CYBERSEC Programming Director – The aspiration of the Three Seas Initiative is to become a project fitted for the XXI century. The acceleration of the implementation of the digital dimension is absolutely necessary in order to successfully modernize and develop the states of the region. In practice, the digital highway means connecting the states of the Three Seas Region with a fast network of IT connections based on, inter alia, 5G technology.

As was underlined by Ambassador Sorin Ducaru, Former Assistant Secretary General for Emerging Security Challenges, NATO, the Digital Three Seas Initiative and the ‘3 Seas Digital Highway’ project are not just an idea for tightening the collaboration between the states of the region – The Digital Three Seas Project presented by Izabela Albrycht at Bucharest, was one of the most important elements of that meeting. It’s not only about overcoming the gap between the East and the West, actually this project is a chance for an important technological advance for the whole region. Pablo Chavez, the Vice President of Google Cloud, agrees with this opinion – The Three Seas Initiative is a perfect opportunity to develop the regional information infrastructure. As Google, we would like to participate in it – he announced. Also the Vice President of Microsoft, John Frank, expressed his appreciation for the initiative suggested by the Kosciuszko Institute. – The digital dimension of the Three Seas Initiative is incredibly important. Never before has there been such a good opportunity to globally compete in the cutting-edge technology sector.

Paweł Surówka, the President of PZU, in turn, pointed at the fact that the Digital Three Seas initiative is not only a political project - D3SI is not only an important initiative relating to infrastructure and security, but it’s also a huge business opportunity – he underlined.

However, in order to be able to implement the project initiated by the Kosciuszko Institute, there’s still a lot of work that has to be done. – A lack of mutual connections, the so-called ‘interconnectivity’, is a big obstacle in constructing the Three Seas Initiative, and this blocks the, almost unlimited, economical potential of this area – as was underlined by Zrinko Petener from the Office of the President of Croatia. These are, however, not the only challenges on the way to the successful implementation of the digital highway – A challenge is also finding the way to balance the willingness to immediately connect everything with the need to do it safely. – as was concluded by Melissa Hathaway, former Cybersecurity Advisor in George W. Bush and Barack Obama administrations.

The Digital Three Seas initiative, close co-operation between CEE states concerning cybersecurity and deepening transatlantic relations in this respect are the main topics of this year’s CYBERSEC Forum. The conference, which is being held already for the fourth time, provides two days of intense debates, over 140 speakers and nearly 1,000 participants from all over the world. Not only do CYBERSEC participants bring up key challenges concerning the discussed issues, but they also provide practical and innovative recommendations, which may be implemented into cybersecurity policies and strategies of states, international organisations and enterprises.

The CYBERSEC Forum is organised by the Kosciuszko Institute, a leading non-governmental R&D non-profit organisation, established in 2000. This think tank’s mission is to support social and economic development as well as security of Poland as an active EU and NATO member. The Institute specialises in creating strategic recommendations and directions of development of key public policies providing substantial support for Polish and European political decision-makers. More information: https://ik.org.pl/en/.