The cybersecurity of the 5G network 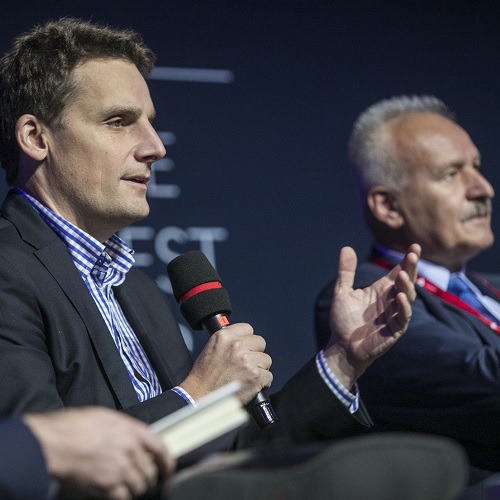 The security model in which the 5G network is going to be developed in Poland and in the region will strongly influence the national and economic safety of states. The 4th European Cybersecurity Forum – CYBERSEC 2018, involved discussions concerning the telecommunication network security related consequences of the development of the 5G network.

International experts and institutions more and more frequently raise issues related to the security of the 5G infrastructure. The concerns relate to a whole range of susceptibility – starting from insufficient product cybersecurity standards and ending with the deliberate installing of backdoors. Therefore, one of the aspects of this issue is the appropriate defining of threats related to the security of the whole 5G technology value chain.

The 5G network is an enormous chance for a civilization leapfrog for less developed economies. This is particularly important in the context of the Digital Three Seas initiative and the digital highway proposed by the Kosciuszko Institute; this initiative is one of the main topics of this year’s CYBERSEC Forum. As was described by Nikodem Bończa Tomaszewski, the President of Exatel – The current fiber optics infrastructure forms connections mainly in the EAST-West axis. The flow of data at the North-South axis is significantly poorer. That’s why the 3SI digital highway may positively modify this situation. However, according to Karol Okoński, the Secretary of State in the Ministry of Digital Affairs, in order to seriously think about the development of the 5G infrastructure, it is necessary to further simplify the investment procedures and decide whether we want to develop one or several such networks.

According to Martin Mellor, a representative of Ericsson in Poland, the security of the 5G network has to be taken into consideration already at the stage of developing technological solutions – It’s not only about sophisticated devices such as cars, but also bout the simplest ones, which will also be linked to the network. – he underlined.

- If a technology is implemented and only then someone starts to think about the security – then it’s too late. – said General Włodzimierz Nowak from the T-Mobile Polska management  during a debate on the challenges related to the security of the 5G network. That’s why it’s so important to, already today, seriously consider the coordination of certification systems in particular states – We have to perceive this issue in terms of security understood as one of the fundamental citizen rights – said Michał Boni, EU MP.

The way we develop the 5G network will significantly impact further digital transformation, thus issues related to models and security standards are subject to the considerations of EU governments – said Izabela Albrycht, President of the Kosciuszko Institute. The initiators of the Digital Three Seas also indicate that ‘it is necessary to perform a careful assessment of the collaboration areas in terms of the effective utilization of business opportunities, but also – the appropriate securing of the strategic interests of the Three Sees States, the NATO and the EU. One of these areas is the safety of the digital infrastructure.

The development of the 5G network will consume enormous resources in Poland and there’s not much time left for making decisions regarding this strategic issue. According to the plans outlined in the “5G strategy for Poland”, the network is supposed to operate on a commercial basis at least in one big city in Poland in 2020, whereas within 2025 it is supposed to include all cities and the main communication routes. The remaining EU states have got similar plans, based on an EU strategy.

In UK there is a discussion in course regarding the profit and cost account on the side of safety and economic interests. The UK National Cyber Security Centre (NCSC), the boss of which, Ciaran Martin, is one of the speakers at CYBERSEC 2018, has, already in April this year, warned about the long-term negative effects of using components from particular suppliers. In the USA and Australia in turn, concerns related to security have led to a ban for using subassemblies of particular manufacturers, i.e. Chinese companies, in 5G networks.

The CYBERSEC Forum is organised by the Kosciuszko Institute, a leading non-governmental R&D non-profit organisation, established in 2000. This think tank’s mission is to support social and economic development as well as security of Poland as an active EU and NATO member. The Institute specialises in creating strategic recommendations and directions of development of key public policies providing substantial support for Polish and European political decision-makers. More information: https://ik.org.pl/en/.