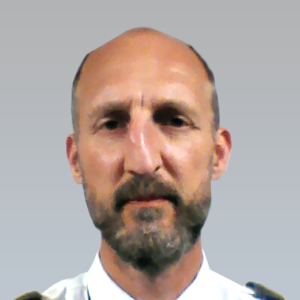 Commander Lees joined the RN in September 1989. During the next 12 years he was more or less continuously at sea; qualified as a Frigate Navigator and then as a Principal Warfare Officer (Communications and Electronic Warfare). His last sea-going tour was as PWO in HMS INVINCIBLE, 2000-2001. His first full shore appointment apart from courses was to PJHQ 2001-03 as SO2 J3 Ops Support (Information Operations) – the forefather of today’s J3 Joint Effects. Most of the period since has been spent in Info Ops or related tasks, including in Canada on exchange then Staff Course in India 05-06.  He was then a Squadron Training Officer at BRNC Dartmouth before eight months in Baghdad as the Assistant Naval Advisor; and then to a two and a half year tour with 15Psyops Group which included taking the PsyOps Support Element to TFH at Lashkar Gar for HERRICK12. A fourth “East of Suez” tour then followed, as SO2 N2 at the UKMCC in Bahrain for 9 months, returning to take up a further PJHQ appointment in October 2012, tasked with operationalising cyber. Cyber Ops was a significant growth area during Cdr Lees’ 30 months at PJHQ.  Significant pace reflected simultaneous contribution to Governance, Doctrine, Joint and Combined partnering and the development of a workable model to bring Cyber into Joint Effects and routinely support Full Spectrum Targeting. This required some flexibility across and between engaged parties. The following appointment as Commander British Forces and Commissioner’s Representative at Diego Garcia brought professional and personal development across a range of old and new interests.  As well as a breath of roles, responsibilities and authorities at the head of a highly focussed local team, Cdr Lees represented a diversity of more centralised bodies across Whitehall. Now writing Doctrine at Shrivenham, Cdr Lees aims to invest his diverse experiences into current and future guidance for today’s leaders.