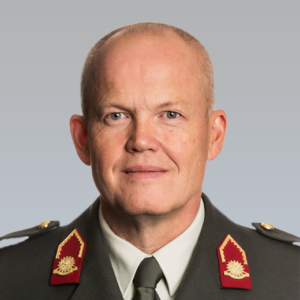 Brigadier general Hans Folmer was born in 1964 and joined the Royal Military Academy in 1982. In 1986 he was commissioned as Artillery Officer. From October 2011 he commanded the Task Force Cyber and was tasked to implement the cyber program in the Netherlands Armed Forces. From June 2015 till July 2018 BG Hans Folmer was the first commander of the Netherlands Defence Cyber Command. Before starting the cyber program BG Hans Folmer was Chief Joint C4ISR requirements at the MoD, Directorate for Operational Policy, Requirements and Planning. In June 2007 he was promoted colonel to become the Chief of the European Union Operations Centre and Watchkeeping Capability in Brussels. He acted as Chief of Staff of an EU Operations Headquarters and chaired the Brussels Joint Coordination Team for the EU Supporting Action for AMIS in Darfur. From October 2006 till May 2007 he was the Military Assistant of the Commander ISAF RC(South) in Kandahar. From June 2004 till May 2007 LTC Folmer was CO of the bi-national CIS Battalion of the 1 (GE/NL) Corps. With his battalion he participated in NRF 4 and won the General Fellgiebel price for best German signal battalion. As liaison officer at the Bundeswehr Operations Command (Potsdam, Germany) from 2002 till 2004 he was involved in the planning of operations in Afghanistan, FYROM, Bosnia and the Gulf. ACOS G4 of 1 (NL) Mech Division and LTC Folmer held several positions at the Army Staff and the Army Directorate of Materiel as Senior Policy Advisor and Senior Project  Manager on IT systems, communications, IT Architecture and Command and Control Systems. BG Hans Folmer holds a Master in Electrical Engineering from the Delft University of Technology and a Master in Strategic Studies from the US Army War College.