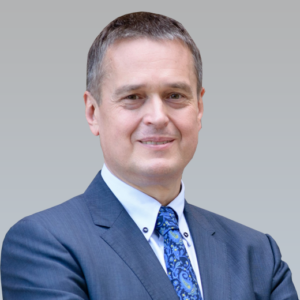 Graduated from Warsaw University of Technology, Faculty of Electrical Engineering. From 1994 to 2006, he was hired by the Polish branch of Hewlett-Packard to lead the HP Poland’s President position for the last eight years. Left HP for Polish subsidiary of Oracle Corporation in March 2006. While serving as President of Oracle Poland entity, Andrzej was also responsible for Oracle’s Middleware software business in Central European Cluster. From September 2013 to June 2016 he joined Asseco Group assuming the VP position, responsible for Asseco Poland IT Infrastructure business. In July 2015 he was appointed to consolidate IT Infrastructure Business Unit with 6 Asseco’s companies in Poland forming a new entity - Asseco Data Systems SA, which commenced its operations in January 2016. He acts as the President of Asseco Data Systems and as the Vice President of Asseco Poland responsible for International Organizations and the Uniformed Services Division and Agrcultural Securities Division.