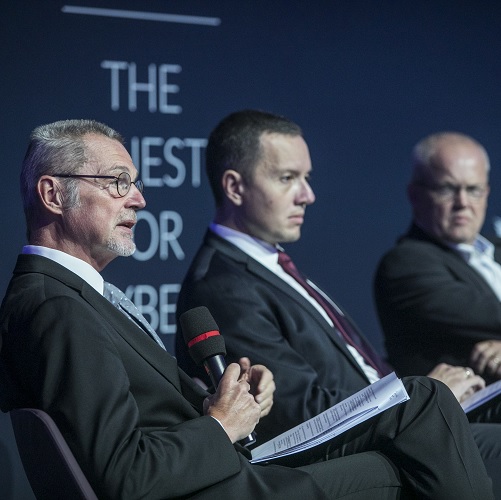 Cyberspace is an area in which NATO has to conduct operational activities the same way as it does in the sea, on land or in air. CYBERSEC 2018 – Europe’s most important conference devoted to the strategic issues of security in the web is in progress in Cracow. The guests of the conference include i.a. Antonio Missiroli, NATO Assistant Secretary General for Emerging Security Challenges. It’s his first visit in our country.

- NATO’s full operational capability in terms of cybersecurity is expected in 2023 – as announced at CYBERSEC by Antonio Missiroli. According to him, cyberspace is one of the most dynamically changing areas of NATO’s activity – Cyberspace constitutes a quickly developing domain of regulatory changes. We’re still working on the doctrine, simultaneously developing the training activities in this scope. – said Missiroli during the panel related to the future of NATO’s cyber-policy.

Ambassador Sorin Ducaru, the predecessor of Missiroli, underlined that it was only at the NATO summit in Warsaw two years ago that NATO started considering cyberspace an operational domain – Earlier we were focused only on the physical domains of operational activities – he indicted. Thus NATO has still numerous challenges in the field of cybersecurity ahead, and new challenges emerge every day. - We are in the very early days, and everything we think today, may change tomorrow – highlighted general Hans Folmer from the Netherlands’ Army. This opinion is also shared by Tomasz Zdzikot, the Secretary of State in the Polish Ministry of National Defense. - ‘We have to think about creating a legal framework for using offensive tools, which is also crucial for deterrence – said the Deputy of the Minister of National Defense during CYBERSEC 2018. - Declaring, that cybersecurity is an operational domain brings a lot of challenges. Firstly, the member states have to develop their own capabilities. In Poland, activities in cyber-space are conducted in two domains: the military domain – which lies in the responsibility of the Ministry of National Defense, and the civil domain – lying in the competence of the Ministry of Digital Affairs. – he underlined. Justin Kershaw from Raytheona, in turn, advised not to underestimate this problematics - Cyber-future is a dangerous world. The hybrid warfare is something that we should all consider, the people who will come after us will face something much more complex that just cyber-attacks.

The CYBERSEC Forum is taking place only several days after the declaration of the USA administration which announced that the USA will make their defense and offense capabilities in the cyberspace available for their NATO allies. Recently Pentagon also published a new cybersecurity strategy which adopted a more aggressive approach and announced using military capabilities. According to the document, the USA are going to hold cyberspace operations for intelligence purposes and will prepare cyberspace capabilities in order for these capabilities to be applied in case of a crisis or conflict. The Americans are prepared for applying offensive operations equally as they are in case of other weapons, against their enemies.

The CYBERSEC Forum is organised by the Kosciuszko Institute, a leading non-governmental R&D non-profit organisation, established in 2000. This think tank’s mission is to support social and economic development as well as security of Poland as an active EU and NATO member. The Institute specialises in creating strategic recommendations and directions of development of key public policies providing substantial support for Polish and European political decision-makers. More information: https://ik.org.pl/en/