CYBERSEC 2018 is swinging into high gear – the main topics of the second day of the conference are going to include cyber-defense and the challenges of the future. 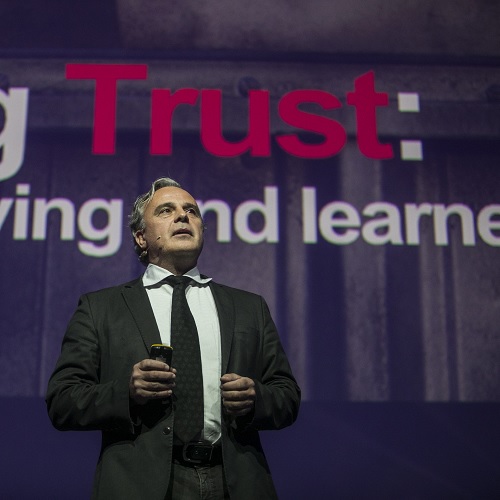 It’s the second day of the CYBERSEC Forum in Cracow - the most important event devoted to the issues of security in cyberspace.

The first day of the conference ended with the official opening of the ‘Digits, Codes, Ciphers – 100 Years of Polish Independence’ exhibition which provided insight into the contribution of Poles into mathematics, cryptology and IT, and at the same time – popularized the history of Poland on the hundredth anniversary of Poland’s regain of independence. A special guest of the event was Sir Dermot Turing who, at CYBERSEC, is promoting his book „X,Y&Z, The Real Story of How Enigma was Broken” which describes the history of the works which led to the breaking of German ciphers by Polish cryptologists. The event also guested the families of the Polish cryptologists who contributed to breaking the Enigma code: Ms Janina Sylwestrzak – the daughter of Marian Rejewski, Mr Jan Różycki – the son of Jerzy Różycki and Ms Maria Bryszak – the niece of Henryk Zygalski.

The great opening gala was preceded by hours of interesting debates and discussions, traditionally conducted in four thematic fields: Business, State, Defense and Future. The speakers at the conference all agreed that cybersecurity should be a priority for both governments, companies and institutions and also average users of the web should have higher awareness of the threats arising from the cyber-realm.

- We have to maintain fundamental hygiene in the web, which means that every one of us is to some degree responsible for cybersecurity – said EU MP Michał Boni during one of the debates. However, as was indicated by the speakers, a high security level is expensive – Despite the billions of dollars we invest in cybersecurity, cybersecurity is still in dark ages. Currently the internet is very, very young. This is where the dreams of childhood meet the harsh reality of what it is to be adult – says Rafał Rohozinski, the CEO of SecDev.

The guests who are going to present during the second day of the Forum include i.a. Antonio Missiroli, NATO Assistant Secretary General for Emerging Security Challenges, Tomasz Zdzikot, Secretary of State in the Ministry of National Defense, Steven Wilson from Europol – Head of the European Cybercrime Centre (EC3) as well as Katie Moussouris, the CEO of Luta Security – one of the most famous hackers in the world, a pioneer in the area of bugbounty, who searches for security gaps in computer software.

CYBERSEC is going to finish with the catch-the-eye session moderated by Izabela Albrycht, the President of the Kosciuszko Institute which will be devoted to the necessity to develop social understanding for the idea of the digital highway operating within the Digital Three Seas,

The CYBERSEC Forum is organized by the Kosciuszko Institute, a leading non-governmental R&D non-profit organization, established in 2000. This think tank’s mission is to support social and economic development as well as security of Poland as an active EU and NATO member. The Institute specializes in creating strategic recommendations and directions of development of key public policies providing substantial support for Polish and European political decision-makers. More information: https://ik.org.pl/en/.